Kelly Edwards and I joined Reading West parliamentary candidate Vicky Groulef along with other members and supporters at a street stall collecting signatures for the mums not millionaires and no to bedroom tax campaigns today.  As you can see from the photo it was pretty windy but people were keen to stop and chat and sign the petitions ( over 200 signed in just 2 hours).

I plan to go door to door in Whitley next weekend with anyone who will join me to collect more signetures.

Nationally the protests about the bedroom tax and the government’s panicked attempts to modify it show just how strong feelings are running against this shambolic Tory government.

I am ashamed to live in a country where the disabled, new mums and the low paid are being targeted while the government cuts taxes for millionaires.  That may sound like the party line but it’s the truth and I’m proud that my party is standing up for people.

I still haven’t blogged about the most recent council meeting at which both the Liberal Democrats and Conservatives made speeches supporting the bedroom tax.  I am still too angry given the private information I have about what at least some of them really think.  Because if this I won’t be doing so but I do note there were honourable exceptions (Conservative) who left the chamber for the debate, which is council convention when you disagree with your group but don’t want to be disloyal. 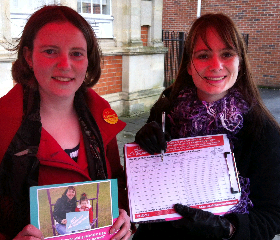